Prevention of allergies in children

Allergy – this word is familiar to everyone. Now it is almost impossible to meet a person in whose family or environment there would be no people suffering from allergies.

According to the studies of the last ten years, in developed countries there is a pronounced increase in the incidence of allergies. Currently, allergic diseases rank second after acute infectious diseases (ARI). This problem is especially acute for children, over the past 5 years the number of children suffering from allergic diseases has increased almost 3 times. In the first year of life, every third child suffers from an allergic disease.

Atopic dermatitis, one of the most common skin conditions in infants and children, usually begins within the first 6 months of life and often continues into adulthood. It is also called: eczema, diathesis, neurodermatitis. Atopic dermatitis is characterized by a hereditary predisposition to allergies, changes in the rash with age, and a tendency to chronic recurrent course. Atopic dermatitis can be associated with the work of the gastrointestinal tract, in particular with the immaturity of the enzymatic system. In this case, it takes up to three years on average. But about half of children with atopic dermatitis may develop other allergic conditions as they age.

Allergic rhinitis is a disease of the nasal mucosa, which is based on allergic inflammation. The child’s condition is similar to a cold, but without fever: a clear runny nose or stuffy nose, itching in the nasal cavity, repeated sneezing. Against the background of allergic rhinitis, infectious diseases are more severe, due to the fact that the nasal mucosa is inflamed and cannot perform protective functions. Such children are characterized by frequent acute respiratory infections, prolonged, difficult to treat rhinitis. Allergic rhinitis is a risk factor for the development of bronchial asthma.

Bronchial asthma is a severe chronic disease characterized by recurrent attacks of shortness of breath or suffocation. Sometimes such a diagnosis is made even in cases where the child has a prolonged dry, paroxysmal cough, which intensifies at night or upon awakening. Bronchial asthma refers to diseases with a hereditary predisposition and, as a rule, develops in children with a family history of patients with allergic diseases.

With age, children usually develop new allergic diseases, and the previous ones can either disappear or persist. This phenomenon is called the atopic march. The atopic march means that “diathesis” in children can serve as the initial stage for the development of other, more severe forms of allergy – primarily bronchial asthma.

Everyone knows that prevention is better than cure. This is exactly what prevention does. The main goal of prevention is to reduce the risk of allergy or, if possible, to reduce and delay its clinical manifestations. Prevention of allergic diseases in children should be started not only before birth, but ideally, even before conception. Special attention should be paid to three main points: the state of health of the mother, her nutrition and living conditions.

If the expectant mother has some kind of allergic disease, especially if it is bronchial asthma, then she should be examined by an allergist even before pregnancy. The doctor will determine whether the disease is in remission or exacerbation. In case of exacerbation, it will be necessary to undergo a course of treatment. It is better if the pregnancy occurs in a state of remission of an allergic disease.

During pregnancy, the expectant mother should also be monitored by an allergist in order to track changes in time, carry out the necessary examinations, and, if necessary, adjust the treatment. Many mothers are afraid to take medications during pregnancy, worried that this could harm the baby. But the exacerbation of the disease is more dangerous for the health of the baby than adequate treatment that the mother can receive.

Compliance with a hypoallergenic diet is important, especially in the second half of pregnancy. It does not matter what form of allergy a pregnant woman has. Even if there was no food allergy, it is worth limiting foods with high allergenic activity: citrus fruits, honey, strawberries, nuts, chocolate, tomatoes, pineapples, smoked meats, caviar, canned food, fish, seafood, chicken.

After the birth of a child, one of the most important preventive measures is breastfeeding. If a mother is breastfeeding a child for at least 6 months, then this reduces the risk of developing bronchial asthma in a child by 2 times. 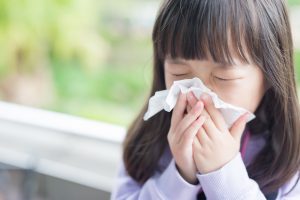 If breast milk is not enough or not at all and it is necessary to prescribe a mixture, then it should be selected by a doctor, taking into account the state of health of the child.

In addition, it is necessary to exclude contact of the child with other allergens, i.e. establish a hypoallergenic life. The main household allergens to control are:

house dust, especially book dust, it is better to clean open bookshelves
mold spores – most often fungal colonies are found in the bathroom, toilet, kitchen, in flower pots.
house dust mites that breed in bedding, mattresses.
waste products of cockroaches
household chemicals, aerosol cosmetics
tobacco smoke
The child’s bed should not contain coconut flakes (often found in mattresses), feathers, down, woolen things (blanket), seaweed, buckwheat husks (a common component of pillows). Wet cleaning must be carried out daily, in the absence of the child at home (in the room). Unfortunately, most pets are bad neighbors with allergies. Particles of wool, fluff, epidermis, food for fish or birds are all strong household allergens.

An important role in the prevention of allergies is played by judicious vaccination, which must be carried out in full health, with accompanying therapy, which is prescribed by the doctor.

At first glance, meeting these recommendations may seem like a daunting task, but children’s health is at stake. It is the right actions of parents that can reduce the risk of allergic diseases in children.

If the disease has nevertheless developed (as a rule, at first, these are skin manifestations of allergy https://en.wikipedia.org/wiki/Allergy), then an allergist consultation and treatment is necessary in order to prevent the transition of allergies to more serious forms.